A. (Awareness of the issue/opportunity for Dublin.)

We’d like to explore the idea of ‘Project Champions’ – certain people leading, administering, and facilitating others to carry out certain roles in their community. 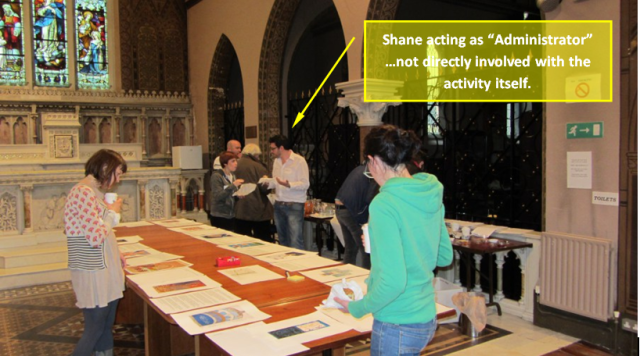 B. (Background to the issue/opportunity within Dublin.)

We’ve been thinking about three items:

a)  How to scale from a Beta Project macro to citywide implementation.

b)  If Beta Projects are expanded across the city, how to facilitate and encourage the self-expression of each of the neighbourhoods of Dublin?

c)  How to facilitate and encourage the evolution of ideas in a ‘here’s how’ method, rather than ‘here’s a comment’ method. Ie – how to enable faster learning by encouraging diversity.

If you can think of more situations, please let us know in the comments section below!

C. (Compile and Create solutions for the above A+B issue/opportunity.)

We’ve been thinking about this, and combining the above three issues, we think that it would be worth exploring the idea of neighbourhood or project ‘champions’.

When might such a role be useful to Dublin? Some examples…

The reason that we’re using the “champions” phrase instead of “administrator” or such, is that because we think (hope) that the role will be more than simply administering…that people will bring their passion and creativity also, and will champion their version. However, it’s just a working title…suggestions for a different name on a postcard please.

We’re suggesting (and we’ll have to see how it works out) that this Project Champion would manage / guide the project, but wouldn’t tend to be directly carrying out the project itself.

Example: Josephine Bloggs is the ‘Project Champion’ going to arrange artworks on the 14 traffic light boxes in the Rathmines neighbourhood for 2014. She has a ‘how to’ toolkit – which was thrashed out, and established by a Beta Project macro, so she only needs to focus on the actual doing aspect (not all the permissions, etc). She uses that ‘how to’ toolkit to work with others to put art onto the boxes in her neighbourhood.

D. (Decide on the priorities of the solutions listed in step C above.)

For now, we’re just looking at this one possible solution.

If you can think of other ways to solve the three issues/opportunities listed near the top of this blog, please shout out in the comments below! 🙂

E. (Effect and Evolve a prototype of your solution, prioritised in step D above, ‘on the street’ in order to stress-test the below assumptions with ‘real world’ measurements and observations.)

We’d love to hear your early feedback based on this blog post. Alongside that we’re going to look to test the Project Champion role ‘on the street’ (ie in the real world, with real people’s everyday experiences) around some specific projects…

Not applicable as yet.

What do you think? We'd love to hear feedback! :) Cancel reply